Unpleasant jobs and splurging while shopping

Today, for the first time since I was deployed to Yei, I have to deal with a job I really, really wish I didn't have to do.

Okay, some background first off all: The job as UNMO-Coordinator in our sector will be vacant from May, since the guy holding the position is going to go home after his time in Sudan is up. So far no one have applied for the job - mostly I think because it is in Juba, and Juba is big, noisy and expensive.

So now the task have come down from up high: Each Team Site Leader - or Acting TSL, in my cause - have to nominate someone to the position and justify the nomination based on the vacancy announcement... meaning you simply can't nominate the (hypothetical) guy you want out of your Team Site. And it is not an easy job, and it certainly ain't pleasant. How can you with an easy heart nominate someone to a position they haven't applied for voluntarily? How do you justify putting two guys who have different strengths at different priorities? One perhaps speaks better English, the other is much better at planning. A third might be a computer genius, while the fourth don't excel in anything but is "merely" good at all three?

But when the chips are down, this is my job and my responsibility as the Acting Leader of the UNMOs at this time... and while I don't have to like the task I'm given, I'll still have to do it. And since I'm me, it'll be done quickly too - Juba will have their reply this afternoon.

In lighter news, I got a surprise when I arrived in my container after shopping: 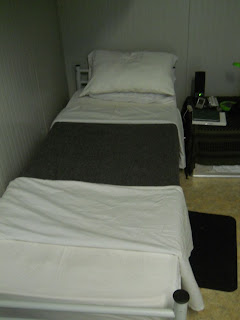 Yes, the bed have been made up in a new and novel way! Let's see if this is a one-off or if this is the start of another round of beds of change.

Speaking of shopping - todays groceries was heavier than usual, since I had to restock on rice. 5kg of rice (11lbs) should last me for months, even if I eat rice two days out of three. I also spotted something in the store I just had to have, even if it can be argued it's frivolous splurging... but then again, after getting that unpleasant job dumped in my lap I probably needed to do some retail therapy (the other sort of therapy easily available in Yei revolves around beer). 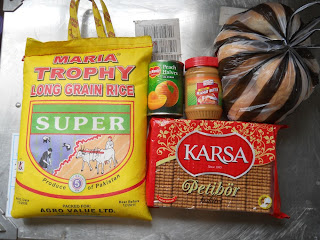 Can't see it? Lets zoom in then: 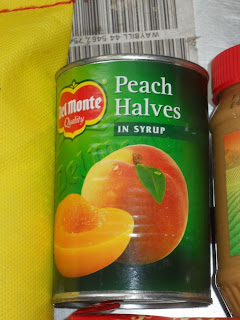 Yes... peaches in syrup! So tasty and sweet, almost decadent considering my menu usually revolves around rice, lentils and bread. I know what I'm having for Sunday dessert!
Posted by Hans M at 12:25