Sometimes you just want something that clears out the sinuses... so I made dinner for lunch again. Which is less bad than it sounds, seeing as how it means I'll have lunch (bread) for dinner instead... Anyhow, I felt for something spicy: 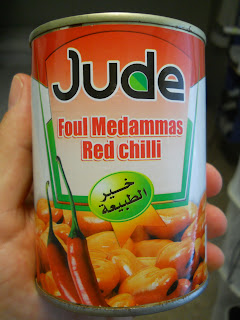 Foul, in it's many variations of spelling, is one of the staples in large parts of Sudan... well, except the part I am now off course. Basically it's bean stew - but often extras are added to make it a little more exciting. Like this tin, which have red chilly added to it - a good start for a spicy meal. 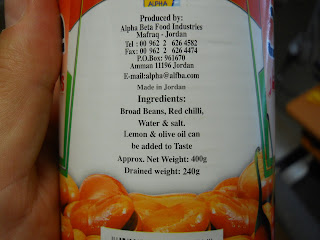 Broad beans, red chilli, water and salt... not much in the way of preservatives or "approved additives" here. For really simple cooking you could just pop the lid and heat the contents, but since I'm a firm believer that a can is not a unit of measurement when it comes to cooking, I couldn't leave it at that. 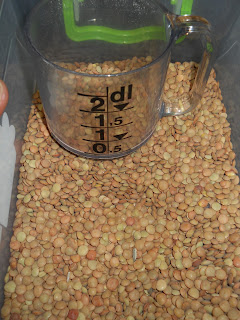 What better to combine with beans other than another kind of beans? Or lentils, as they are also known. A half deciliter of the stuff swells out to about twice that, meaning one can of foul goes from a snack to a meal. 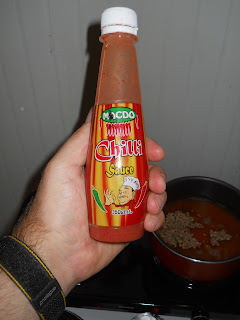 Still not quite spicy enough, but in the back of my pantry this was lurking... a quick look at the expiration date, a quick sniff to make sure it was okay, and  a quick pour into the pot to spice things up. About two, three tablespoons can really set things on fire! All in all, a tasty meal with a good afterburn... if I hadn't been on duty I would have grabbed a can of beer alongside, but as it is I had to make do with mango juice - not that mango juice is a bad alternative, far from it.

In other news, my coworker who was home on leave when I returned to Yei got the camera he asked me to bring for him today, and is very happy. Already I have at least one firm order for another one - it is amusing to consider that Norway, which is a very expensive place to live, is cheaper as far as electronics go than most other places: Cheaper than Africa (no surprise), cheaper than Peru (somewhat surprised) and cheaper than Russia (definitely surprised). People are also starting to mutter about projectors... I'm not sure how thrilled I am about ferrying a 7.5 kg lump in my hand luggage, but we'll see. If the guy is willing to pony up almost 2000$, then I guess I can be a good friend and help him get something he couldn't otherwise afford to buy.
Posted by Hans M at 14:02