At least, a SDP again!

A major downside of being the Acting Team Site Leader is that I've had to stay reasonable close to the office, so no SDPs and certainly no LDPs for me. Today however I got to go on SDP as the 2C and driver of the second car. It wasn't a very long drive - about 50 km from start to finish - but on the roads we were on today... lets just say that we call them roads by default, tracks are not wide enough for cars. 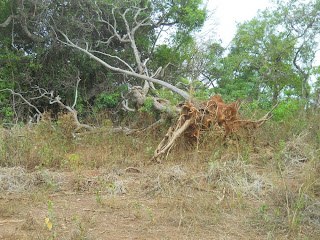 Out in the middle of no where, with no one around, a tree had fallen. Had it made a sound? Who knows... 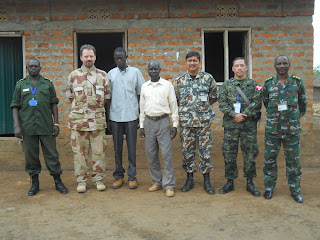 From left: SPLA NM, me, Payam clerk, Payam Deputy Director, Patrol Leader, Driver first vehicle, SAF NM (his first day in Yei).
Sometimes when we're out driving, we have to make a technical stop. Or as civvies put it; pee break.
After we had returned to the Team Site all the UNMOs and representatives for the other pillars in camp made our way down to the Blue Tukul, where we had the Festival of Color yesterday. The purpose of the gathering was to kick start the welfare program in Yei Team Site... something everyone wants to happen but few are actually willing to do anything about. However after hammering out a couple of suggestions, the primary one being a camp wide party on April 2nd, people were willing not only to pony up a bit of cash but also to vote on a Welfare Comity. Knowing that I would be one of the one suggested to lead the whole thing, I quickly volunteered as the treasurer instead... not that I mind being on the comity, but I don't want to be the chairman - at least not in the beginning. Later on, well, we'll see.
Posted by Hans M at 20:48