Looking for a nail

Electricity is something you hardly notice until it goes away... unless you're in deepest Africa and somewhat dependent on the air condition to get anything close to quality sleep that is. We had string of days in December when power was spotty at best, but today the trouble is a bit more personal.

So when I lost power today and realized it wasn't the generators that had failed, it was a simple matter of tracing and find the fault...I did not have power, the neighbour had, ergo the fault must be either in my container or the MSA breaker panel. And since my breakers had not tripped, I make a quick trip behind the other Norwegians container to flip it back on.

But would it stay on? Only for five minutes...

I kept resetting - having disconnected everything except the air conditioner and the ceiling light - and it kept tripping. Finally I got bored, and decided to do a bit more surgery on the fuzebox to see what was up... 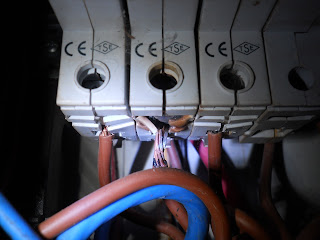 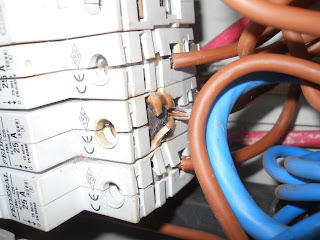 Yeah.. definitely something not right with that circuit breaker. Back in the old days I would be looking around for a nail right now to put in instead of the fuze... but with these modern breakers I would need a bit of wire and some pliers to bypass it.

Tomorrow I have to dig up the Camp Manager and beat him into fixing it ASAP ZULU... I'm sure one night with no AC is going to be plenty enough.
Posted by Hans M at 19:00