From time to time an UNMO (or two) takes it upon themselves to brighten the weekend for everybody and explain why just their homeland is the awesomest place on the planet. Today it was the turn of me and the other Norwegian. Desiring to do a bit more than just a powerpoint show, we decided to combine the presentation with  some coffee and something to bite... I handled the presentation - which including quite a few questions and a bit of discussion - for about an hour, while the other 'wege started up the waffle press and cranked out a nice stack of waffles.

Got to make one thing clear from the first slide; Norway awesome. How awesome? So awesome that our national coat of arms have a frigging lion with a frigging axe, that's how awesome. Off course, this was just the first of thirty odd slides covering the basic facts about Norway, a quick history, a fair number of photos, Norwegian food, the Norwegian language and Norwegian winter sports.

The bit about mapfolds is an internal joke - all our patrol briefs starts with the mapfolds, that is the limits of the area the patrol will operate in. The coastline I had to explain a couple of times before it really sunk in - but then it's counterintuitive that a small nation like Norway have a coastline that is more than twice the distance around the globe.

Random picture of Norwegian nature. Looks pretty nice, but then a 218 meter tall waterfall is not something you see every day.

It also took a while to explain why there is so many different bunads in Norway... but no time flat to tell them that I own one myself (some disappointment that I had not brought it with me to Yei though). 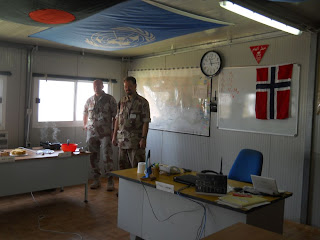 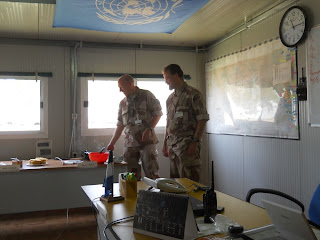 ..but no burnt waffles - got to keep an eye on them. 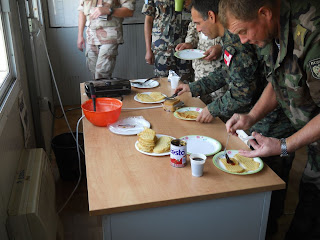 Properly served with strawberry jam and brown cheese, the stack of waffles disappeared rather quicker than we had expected. We could easily have made three times as much and still be cleaned out. The discussion started during the presentation carried on during snack-time, ranging from hydro-electrical power plants to tax rates in Norway.
Posted by Hans M at 22:11